Squash boats nestled in salsa, filled with zesty taco meat, and topped with cheese. A new twist on taco night!

Everyone loves tacos, right? Right. This recipe is a new take on a taco, and a great way to get in a serving of vegetables. Same taco flavor you love and expect, just using a healthier, gluten-free alternative. I used yellow squash because I had a ton, but if you have zucchini feel free to use that instead! My husband doesn’t love yellow squash but he went back for seconds on this dish!

The meat in the boats is really flavorful due to a low-and-slow simmer in a homemade taco seasoning. Fear not–homemade does not have to equal complicated! It’s made with just cumin, chili powder, paprika, oregano, garlic powder, salt, and pepper. There’s no need for a taco seasoning packet filled with all sorts of additives when making your own is this simple! Chances are you already have those spices sitting in your pantry right this very moment.

To make the squash into “boats”, you have to spoon out the seeds in the middle. You can’t do this easily without cooking the squash first. Lucky for you I tried that method to see if I could skip a step and the answer is clear: NOPE! If you’re using zucchini, you might be able to do this with a melon baller while they’re raw. Regardless, you need to cook the boats before you stuff them because the final bake in the oven is not going to be long enough to cook them start to finish.

So, you have two options:

I prefer the second option for many reasons:

Let’s be honest, that last point was the real reason. : )

But, if you’d rather boil the halves then go for it! Either way, let them cool before you scoop out the seeds in the middle. 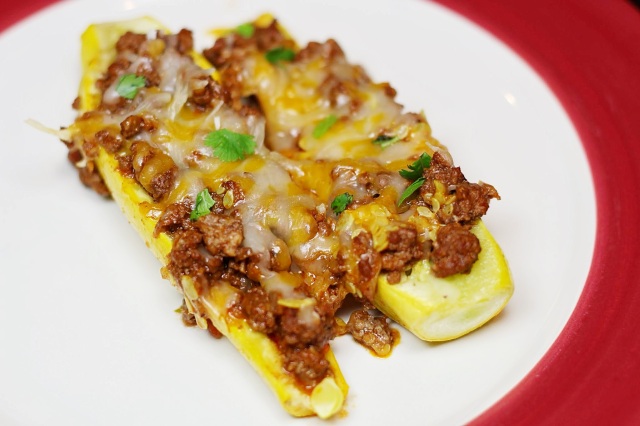 Would you try this? Does your family have a taco night? Let me know in the comment section below. I see a lot of “Taco Tuesday” posts on social media. I love experimenting in the kitchen a liiiiiiittle too much to dedicate an entire meal every week to the same dish, but I can definitely see the appeal!

1). Preheat the oven to 400F. Line a pan with foil and spray with cooking spray. Lightly drizzle squash with olive oil, then sprinkle with salt and pepper. Place the squash face down on the pan and bake for 12-15 minutes, or until fork-tender. Allow them to cool a few minutes until they aren’t too hot to touch, then use a spoon to scoop out the center of each half. Reserve this to add to the meat mixture (optional).

2). While the squash is baking, heat a large skillet over medium-high heat and brown the meat. Add the onion and bell pepper. When the meat is no longer pink, add the spices, leftover squash, tomato sauce, 1/4 cup salsa and water. Stir, cover, and let it simmer for about 15 minutes.

3). Meanwhile, spread about 1/4-1/2 cup salsa in the bottom of a 9×13 baking dish. Arrange the squash boats in the baking dish. Add 1/3 cup of meat to each boat, then sprinkle with about 1 tbsp cheese and some fresh cilantro. Cover and bake for 20-25 minutes or until cheese is melted.

Who says Mexican food has to be unhealthy? If you make your own at home you have complete control over how much salt you use, oil you pour, or spices you add. They key is to forego using the store bought packets of fajita seasoning. You can make your own spice blend easily and it is so much healthier–no MSG or excess sodium. The final product is flavorful while low in fat and high in protein. I was really pleased with the way these came out and you can easily adapt them to suit your taste!

For lighter fare, I did not serve these with rice and beans, but you certainly could if you want them to follow the typical Mexican restaurant toppings. There was a lot of flavor in the chicken, so a simple topping of salsa and cheese or sour cream was perfect for us! You can also ditch the tortilla all together if you are gluten free!

Many chicken fajita recipes call for the chicken to marinade overnight. I love that this recipe does not require that extra step of planning ahead and still yields fabulous results. To be honest, I almost don’t consider this a recipe…I eyeballed the spices knowing I would want more of the spices that add flavor (cumin, chili powder, paprika) and less of the spice that adds heat (cayenne pepper). So, the measurements are not exact, and they don’t need to be. Change them to fit your family’s preferences! 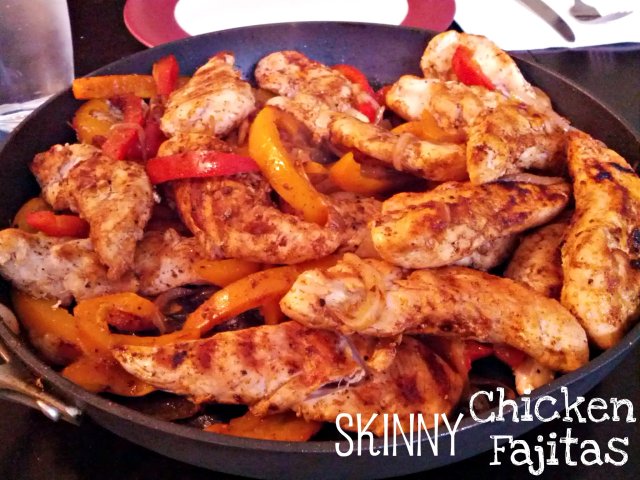 If you have a large family or want to have enough for several leftovers, scale up and use 2 lbs of chicken and as many peppers as you’d like.

1). Pour 1/2 tbsp olive oil in a grill pan over medium heat. Slice the onions and bell peppers and add them to the pan. Season with salt and pepper. Cook until the onions are soft and caramelized and peppers are tender. You can add a few tablespoons of water if they start looking like they might burn. Remove from pan and set aside.

2). Add remaining tbsp olive oil to pan, over medium heat, and arrange as many chicken strips as possible. Cook for about 4-5 minutes on each side or until no longer pink. Depending on how much chicken you use, you might have to do these in batches.

3). Add the peppers and onions back to the pan with the chicken. Now add the spices (as little or as much as you want of each). Toss them together to ensure every bite has equal seasoning.

This recipe is an amazing way to sneak in a lot of kale without having picky eaters complain! I was so pleasantly surprised at how the kale blended away among the spices and was not even noticeable. Kale is so good for you and I am always interested in new ways to incorporate it in a meal. In this case, it gets completely lost in all the other flavors of the dish. I love that the spice blend in this recipe is incredibly simple, yet it tastes even better than the (not-so-healthy) packets of taco seasoning from the store. Overall, it is not very spicy but it does have a little kick. If you want more spice, increase the amount of cayenne pepper to taste. 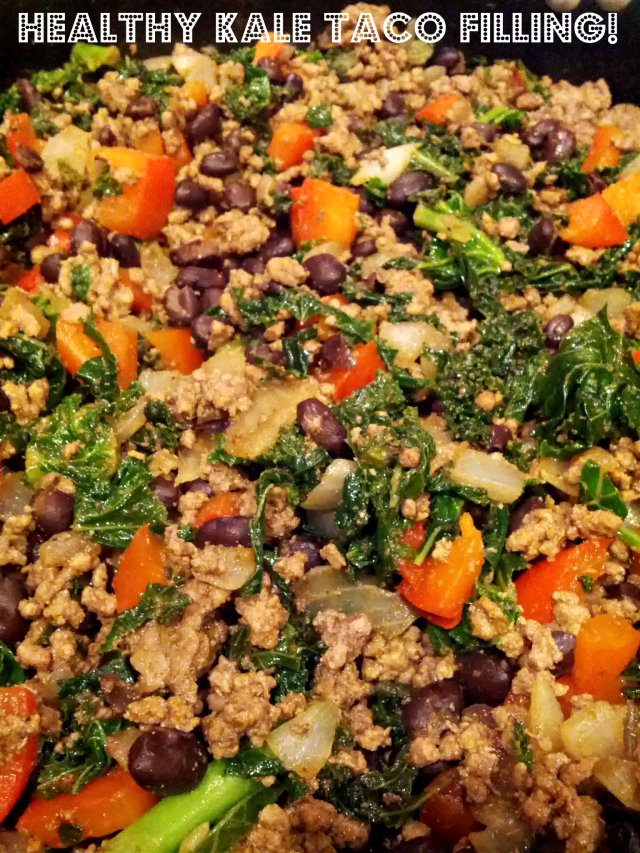 I served this kale, beef, and bean mixture on a bed of crisp greens for me and in small tortillas for my husband. I was curious to see how he would react to the kale being cooked into the mixture, but he did not even mention it and told me the dish was awesome! Win!

Did I mention this easily came together in well under 30 minutes? It is a great choice for a homemade meal on a busy weeknight. I have a feeling we will be enjoying this dish again soon!

I used lean, organic ground beef in this recipe, but I actually originally intended to use ground turkey. After reading this report (and several others) regarding the disgusting addition found in over 90% of ground turkey in the U.S., I am so hesitant to buy ground turkey now. Does this news enrage anyone else, or is it just me? I hate not knowing what goes into the food we put into our bodies. Anyway, perhaps organic, local, grass-fed beef is the way to go…at least for now.

You MUST try this recipe and let me know what you think. I have a feeling your whole family will enjoy it!!

1). Heat a large skillet over medium-high heat. Add the onion and ground beef. Stir until cooked through. Add the diced red pepper.

2). Add the kale and mix together well until wilted. Add the spices and the black beans. Stir occasionally until heated through.

3). Remove from heat and serve in tortillas or on a bed of salad. Enjoy!

Cinco de Mayo is coming up this week and this dish is a little more unique (and healthy!) than your average Mexican taco or quesadilla: blackened tilapia on a bed of brown rice, then topped with a mixture of corn, beans, fresh pico de gallo, guacamole, sour cream, cilantro, and a squirt of fresh lime juice! The result of the combination of all those ingredients was amazing flavor in every bite! There is quite a bit of heat from the seasoning on the fish, so if you prefer less spicy food, use less seasoning on the tilapia. This meal is very filling and low in fat, as long as you don’t go overboard on the toppings. You can substitute quinoa for the brown rice and use frozen or fresh fish, depending on what you have available. From start to finish you can certainly have this rice bowl ready and on the table in 30 minutes. The rice/quinoa will take the longest, so be sure to cook your grain first. The tilapia will cook in a matter of minutes, and it should not take long to chop up fresh cilantro and assemble the bowls. This is sure to be a family favorite–my husband does not typically like tilapia very much and loved this spicy version! 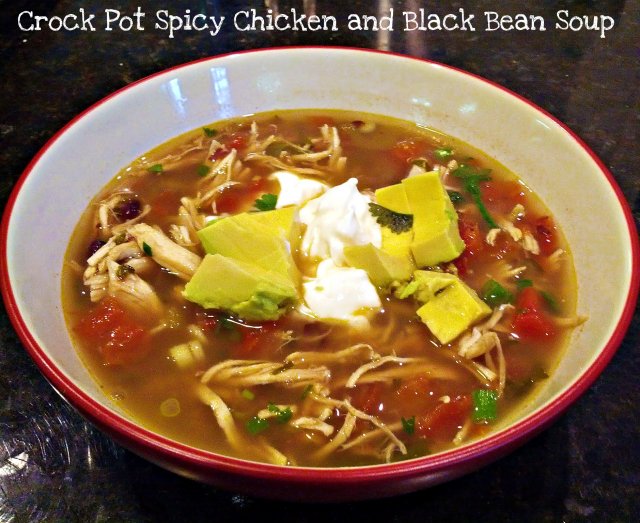 This soup is easy to make, very filling, and SPICY! You can easily tone down the heat by using only half the amount of diced green chiles. The original recipe called for a whole 4 oz can, but I can only handle half!

The weather is starting to warm up but it’s still chilly enough to have soup at night. This soup is sure to warm you up and keep you satisfied for a long time!

If you have a large/hungry family, you should try this Latin-inspired soup. It makes a LOT! Look how full my crock pot was: 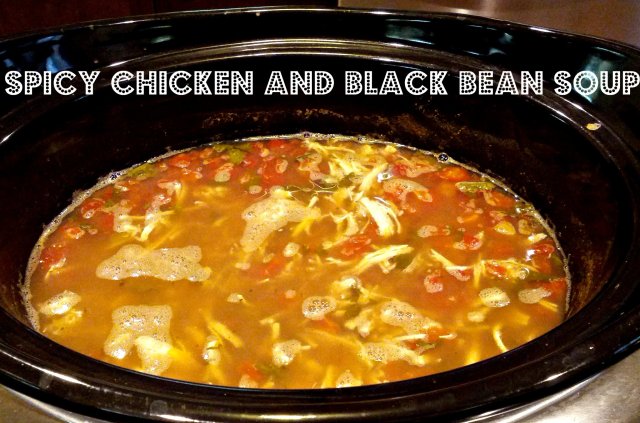 Instructions:
1) Take one can of beans and place in the blender (I used a food processor) along with 2 cups of the chicken broth; puree then add to your slow cooker. Add the remainder of the beans and chicken broth into the slow cooker along with tomatoes, diced green chiles, cumin, chile powder, garlic powder, onion powder, oregano, chicken breast, and 1/4 cup of the cilantro. Set slow cooker to HIGH 4 hours or LOW 6 to 8 hours.

2) After it’s done, remove chicken and shred with 2 forks. Place back into the slow cooker and add fresh scallions, remainder cilantro and adjust salt and cumin, to taste. 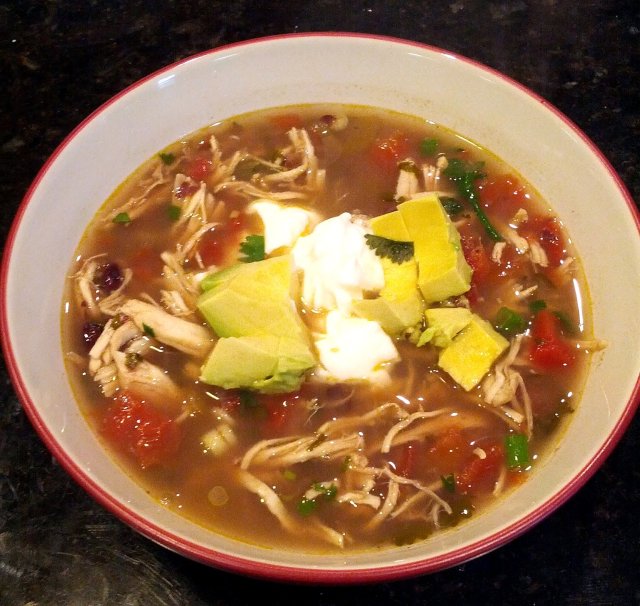